Today, I thought I’d give you a glimpse into my writing process.

I’m on my third novel now and I’ve fallen into a pattern:

For the 12 Commandments (the second book in the Defense of Reality series), I’m writing the climax and hoping to have it to readers shortly after Christmas (which is over a month behind schedule). But last night, I got jammed up. I sat down to write the third to last chapter and realized I didn’t have a location for the final battle scene, and that I couldn’t move forward until I did.

The natural place to hold the final battle of the book is at Druid Hill Park. It’s where the bad guy army is camped. It’s their base of operations and point of strength, so holding their hostage there makes sense.

Unfortunately, as I wrote the scene where the good guys make their battle plan, I couldn’t figure out how the five rescuers could realistically free the hostage if the army knows they are coming. I sketched out the camp on a piece of graph paper (its arrangement is based on what I know of how the Roman army would set up base camps during campaigns) and I just couldn’t get my five heroes inside in a realistic way without a massive Macguffin. And I have a “no Macguffin” rule.

So I started thinking if I kidnapped a guy and I knew highly trained killers were coming to get him, ideally to trade me something for him, where would I want to be? A few things came to mind:

So first I thought about going up and I started brainstorming tall buildings in Baltimore where the top floor could be used as a battleground. There are a few I liked, but getting to them didn’t work with the timeline. Also, there is the whole, “Hero repels in from the roof and crashes through the glass” surprise that I feel happens too much in the movies. So no tall buildings.

Then the thought came to me, “What about a peninsula?” Fort McHenry is a great spot for a fight: wide open fields, surrounded by water, there is a massive gate that lets you in and out.

But then as I started writing it I thought, “How am I going to get rid of all the people?” Fort McHenry is usually populated with joggers and walkers and tourists. I went through multiple scenarios and they were all to unrealistic, so I scrapped Fort McHenry. 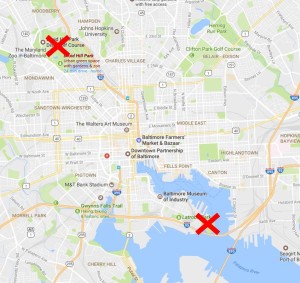 Fort McHenry got me thinking about peninsulas, so I started scanning images of Tide Point and found nothing. I looked at Cherry Hill and found nothing I liked. In the book I already used the lots surrounding the Ravens’ and O’s stadiums, so those were out. Then I remembered Westport. Westport is a tiny island of a neighborhood blocked off from the city by the highways, the Patapsco River and the Gwyn Falls River. There’s been a lot of talk about developing it over the years. At one point, I think Trump was even going to put a casino there. Right now it is still a small depressed neighborhood with an undeveloped waterfront.

But as I scanned images of Westport and tried to remember the times I’ve been in the neighborhood, I again couldn’t imagine a good spot without people around. There’s a large factory there, but I think it is still operational. So I crossed this idea off the map too.

At this point, I’m an hour into my search for a spot and I’m getting frustrated because nothing is making sense to me. I start considering abandoned malls and hospitals, but I haven’t been inside any of them. (If you’ve read a lot of my stuff before, you may have picked up on the fact that I’m bad at settings. I can’t design a space in my head out of nothing. It needs to be somewhere I’ve been if I’m going to make the scene believable.) I’m feeling stuck, until Youtube saved the day and introduced me to Fort Carroll.

Fort Carroll is a small fort built in the mid-1800s that guarded the mouth of Baltimore’s harbor. Robert E Lee was the commanding officer there for a short time. It was abandon after WWI. Now it is overgrown with brush and covered in bird poop. It’s everything I need for the battle scene and even though I’ve never been there myself, I found these:

There are tons of these videos. They are fantastic. Next best thing to being there.

I spent over an hour watching them, making notes, and sketching things out on graph paper. The final battle scene came together in my head. After journalling a bunch of quotes and notes for the final three scenes of the book, I called it quits a little after midnight.

And I’m excited because tonight I get to write it all out.

It drives me crazy that I’m a month behind my initial timeline, but moments like last night, when the pieces all start to fall together makes me feel like the delay is worth it because it is going to produce a better story.

This site uses Akismet to reduce spam. Learn how your comment data is processed.

Click here to receive monthly updates on Jeff’s work in your email.